Relaunches, reactivity, changes of direction, absorption of the roughness of the ground, «pumping» out of corners and on the humps and many other movements have a more or less important component of explosive force.

Every biker would like to have more explosive legs, but … what exercises to do in this regard? Before going into our 10 exercises, let’s learn the definitions and methods of training explosive strength.

The definitions of strength are numerous and vary from author to author depending on the parameters used to describe it.

Harre, for example, collects the different expressions of strength into three categories.

Maximum force: higher force that the neuromuscular system is able to express with a voluntary contraction.

Fast (explosive) force: the ability of the neuromuscular system to overcome resistances with high rapidity of contraction.

Bosco describes the concept of explosive force in a simpler way, defining it as the ability of the muscle to develop very high strength gradients in a very short time.

Explosive force, therefore, refers to two fundamental parameters, force and time, where time is directly proportional to the speed with which the load is moved.

Mainly muscle fibers with a high rate of contraction, white fibers, will be involved. The distribution of the fibers (fast, slow) is closely linked to genetic factors. Furthermore, the conversion of the fibers is one-way, apart from a very small percentage: fast (white) fibers can be converted into slow (red) fibers but the opposite cannot happen.

Among marathon or cross-country cyclists, it is possible to observe higher explosive strength values in the first years of training but conditioned by a progressive deterioration caused by the metabolic demands of endurance sports.

It is not uncommon, however, for a high-level athlete to switch from an explosive discipline to one of endurance. The «conversion» from postcard to road rider is the most frequent cause.

Despite being less exploited in endurance sports, explosive strength remains an integral and important part of mountain bike movements and for this reason, it must not be overlooked.

In rough sections, a good base of explosive force is essential to maintain stability in the most demanding trajectories

Tudor Bompa argues that » no visible increase in power (explosive force) is possible unless it also increases the maximum (absolute) force «.

The explosive force manifests itself in particularly fast gestures but is inevitably influenced by the maximum force, since it is, however, necessary to move sub- maximum loads.

A maximum force base will, therefore, be essential to bring explosive force to optimum levels. Conversely, excessively focused training on maximum strength would lead to an increase in slow-twitch (red) muscle fibers, resulting in a possible loss of explosiveness.

An improvement in maximum force will lead to a consequent increase in explosive force, but this ratio does not apply in absolute terms. Several studies have in fact shown how an excessively focused training on maximum strength can worsen the explosive component.

So yes to maximum strength training for an indirect improvement in explosiveness but without prolonging it for too long over time, usually 8-10 weeks. During this training period, the nerve component comes into play massively. A good functioning of the intramuscular and general coordination is important for a correct execution of the exercise with the minimum energy expenditure. 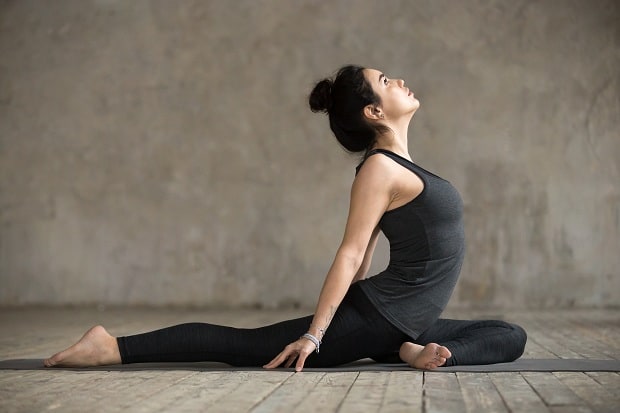 The main methods of training explosive strength can be divided into three main categories:

— Natural load. Explosive exercises like jumps and jumps. The range of repetitions is very varied based on the intensity of work. The use of barbell for leaps has been «banned» for at least 10 years in almost all exercises, so I strongly advise against it.

— Loads 20-30%. Maximum execution speed. Repetitions until the loss of an acceptable unwinding speed.

After a period mainly focused on the maximum strength (8-10 weeks) it will be necessary to transform everything into explosive and specific work to which a multi-joint exercise will be added to maintain maximum strength.

To learn more about training techniques, we also recommend reading the following articles:  Core, what is it and why train it? «,» Diaphragm and diaphragmatic breathing «and» 4 workouts to improve the Ftp «.

The 10 best exercises for explosive strength

1) Starting position. Stand up, hands-on-hips, ready to load. The hands can also be free and used as an aid during the whole movement.

2) In the loading phase, the legs bend as in a classic squat, but with respect to which the flexion of the torso is accentuated to collect a greater elastic force to be expressed in the next phase.

3) Maximum thrust of the lower limbs followed by an extension of the torso. The legs do not bend in the air and an attempt is made to reach the highest possible point.

4) Soft and controlled landing that continues dynamically with another loading phase as in figure 2.

I jump on a seated step

1) The starting position with support on the bench eliminates any possibility of using the elastic component. The contraction will be purely explosive and concentric. The arms can be held on the sides to further accentuate the work on the legs.

2) The force will be discharged mainly in the first degrees of movement.

3) The arrival on the step must be precise and measured. Any coarse support is a sign of gaps in strength management and general coordination.

4) The exercise ends in an upright position on the step. Get off the tool without jumping and repeat.

2) In squatting you will touch the step. Back in protection (do not miss the lumbar curve), heels on the ground ready to push.

3) The explosive phase must be modulated with respect to the height to be reached, keeping as little waste as possible. The arms accompany the vertical movement.

4) Soft and precise landing with both feet.

In the front squat, the barbell must be placed on the deltoids to touch the throat. The elbows must describe an angle of about 90 В° with the body and must always be kept in this position.

The grip on the barbell does not necessarily have to be firm, the hand can open and only have the last phalanges resting on the tool to stabilize it.

1) Width of the feet about that of the shoulders with slightly extra-rounded feet (toes outwards). High elbows as described above.

2) You go down in squatting keeping your back in protection, without losing lordosis. Heels always on the ground. The knees must not go inwards but keep the hip-ankle line as in the starting position. Elbows always in the correct position.

3) Exceed 90 В° paying attention to the precautions of point 2 and return to position 1. 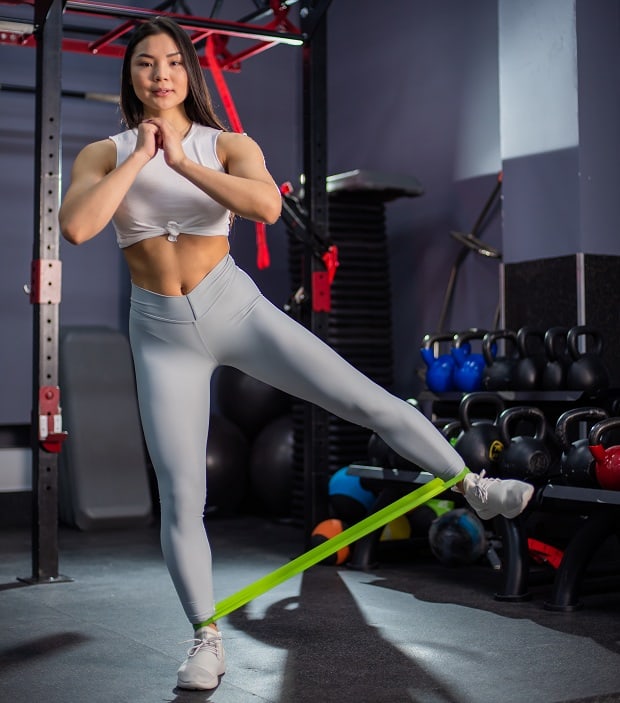 1) In the starting position, the lumbar part must maintain physiological lordosis to allow the spine to unload its forces at best. The arms always stretched have the «only» function of supporting the barbell.

2) During the initial phase, the thrust is generated mainly by the lower limbs. The barbell always remains in contact with the tibia and thigh. The arms continue to remain stretched.

3) Without ever losing the tightness of the back, the extensors of the column and leg come into play in the final phase.

Push off on step

1) Starting position about a step away from the step.

2) The foot resting on the step will be the push. Both feet must have a support on the midfoot, heel raised.

3) The vertical thrust will come from the foot resting on the step, the other will have a complementary function of pushing and balancing in the air. During the flight phase, the extension of both limbs must be complete in order to express maximum explosive force. The arms follow the movement. You return to the same position as in position 2 and start the exercise again.

1) The loading phase starts from a standing and relaxed position, important for the success of the exercise. Leg not in support bent and torso stretched forward ready to extend. The arms, in this case, assume a greater importance in the pushing phase.

2) In the final phase of the thrust, the body must be leaned forward to facilitate horizontal thrust. The suspension arms and leg participate decisively in propulsion.

3) Soft and precise support with one foot. Possible stabilization errors and low precision lead to gaps in in-force management and coordination.

4) After reaching stability ends in an upright position and descent from the steps without jumping.

1) Rest on the forefoot, legs slightly bent to support the pushing phase. Forearms and wrists anticipate the circulatory movement of the rope.

2) Compared to a single jump, the double under the thrust must be greater and coordinated with the movement of the upper limbs. In the descending phase of the rope, the lower limbs must be extended giving way to the detachment from the ground. Fundamental is the work of flexion-extension of the foot, as can be seen in the photo.

3) Flight phase during which the rope must make two turns before landing.

4) The second passage of the rope usually occurs in the descending phase due to a question of rhythm.

5) Return to the initial position with a slight bending of the lower limbs, absorbing the contact on the ground and storing new energy to be exploited in the following sequence.

1) Compared to the detachment from the ground, the initial position is more collected with the femur which describes an angle of about 90 В° with respect to the tibia. In this way, the quadriceps will be more involved in the first phase of the movement. Arms stretched and back in tightness.

2) Explosive clean phase. The involvement of the quadriceps is maximum, supported by all the muscles of the lower limbs and pelvis. The arms remain stretched and the shoulders are raised.

3) In the last moments of climbing the bar, there will be a complete squatting. The goal is to «slip» under the barbell and make it perform as little vertical displacement as possible.

4) The barbell will be resting on the front deltoid, well exposed. The hands only play a stabilizing role. Note the sliding on the last phalanges of the barbell.

5) With an extension of the lower limbs, the exercise is completed.

Pistol with a monopodial jump on lateral step

The most complex exercise of the sequence acheter Stanozolol en France proposed here. An essential prerequisite for the correct performance will be to have complete control over the pistol squat. The pistol squat is a complete monopodial squat, very similar to figure 2 in the sequence, where the suspended limb must be stretched forward without touching the ground.

1) Starting position as in the pistol squat. Monopodalic support and arms forward to improve stability in movement.

2) Pistol squat, squatting completely in monopodial support. The movement will be aimed at loading for the next detachment phase.

3) The pushing phase must be explosive starting to move the body towards the box. Eyes on the box. With the leg in suspension, you can indulge the push.

4) The thrust must be necessarily powerful to overcome the obstacle but also precise in order to have as little waste of time as possible in the air.

5) In stable support on the box, the lower limbs are stretched and a repetition ends. Get off and start again in figure 1.

Here is an example of a weekly microcycle focused on the explosive force of the lower limbs with the maintenance of the maximum force to be integrated with other complementary exercises. The prerogative of a good strength training is multifrequency, i.e. each muscle group must be trained at least 2 times a week to aim for a discreet improvement. 4 sessions per week is the optimal frequency that offers good margins for increasing strength.

Jump on a 4 × 6 monopodial step. Increase height until you find the ceiling of the day for 6 reps. Recovery 2 ‘